Are You Passionate Enough? 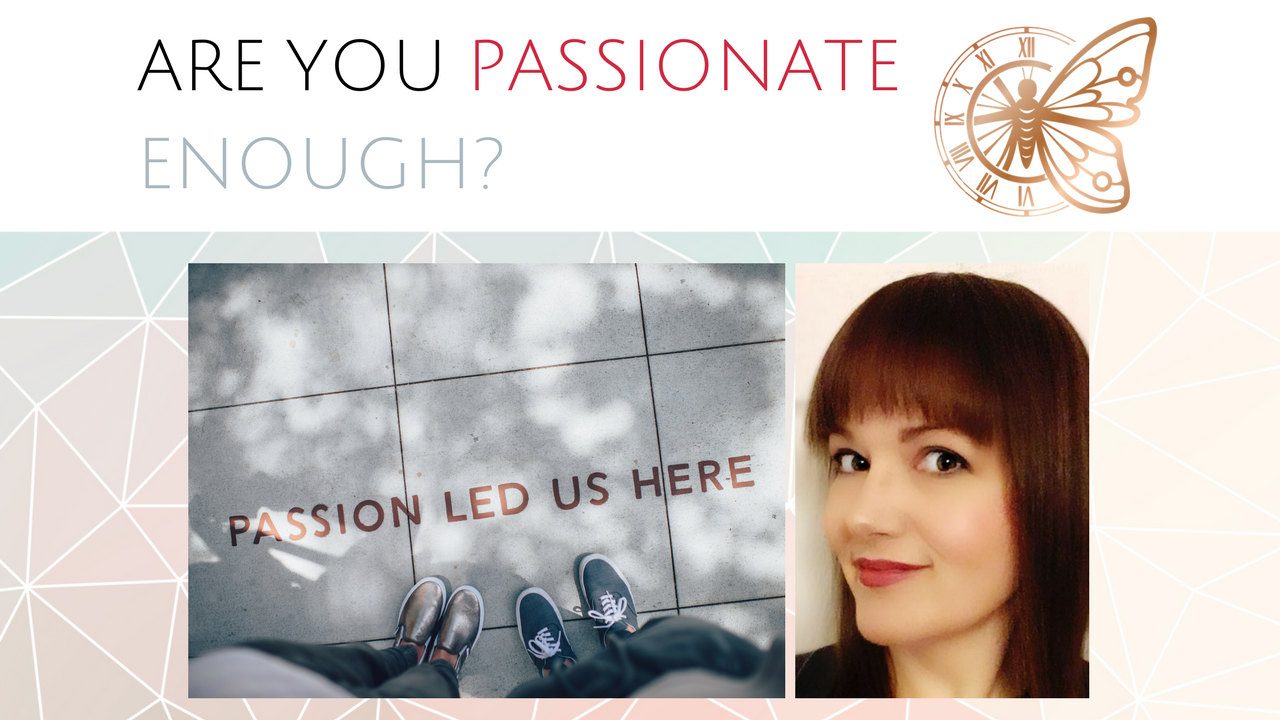 How passionate are you? Do you just tiptoe around on the surface of life, or do you dive into the depths of the oceans of your passions? When you hear the word 'passion' what comes to mind? Sex? OK. Let's go there because, frankly, it's sad that for most people the only brush they have with passion is between the sheets... if that. But if you've at least got that concept sorted, it gives us a place to start.

Romance novelists (I'm a bestselling one of those) know how to pull you into the passion of an encounter. And, no, it's not about the smushing together of body parts. That would be porn. Lust. I'm talking passion. WAY more complex of an emotion. So, how do we pull you into a passionate story so much that you utterly believe you've witnessed the hero and heroine 'bumping uglies' even if you haven't? (Spoiler alert - that happened with my novel hundreds of times. You really don't get to see them doing anything X rated... but you'll think you did). The answer is pretty simple. We connect you with yourself. It's a virtuous feedback loop. Marketers do the same.

When a novelist or filmmaker, or some other kind of Bard puts you in contact with yourself, you feel a passionate connection. But it's not with anyone else. It's with yourself. When you cry for the hero or heroine in a film, you're crying for you. When you read a book and feel the passion between the characters it's because the author connected you with your physical body through descriptive language that triggered your mirror neurons. Yeah, that old chestnut. Sorry to science this up for you, but it's true.

It's how Cambridge Analytica was able to influence the political decisions of up to 85 million people. They set up fake identities that triggered PASSION. The big joke is that they planted into those people's minds language such as 'triggered' to use against their opponents, when they were the ones being triggered all along. However, everyone gets triggered. It's a sign of profound brain damage if your limbic system doesn't do this. If your amygdala doesn't trigger feelings then you're basically dead. Even psychopaths - who aren't triggered to feel empathy - are triggered in the areas corresponding to aggression and lust, for instance.

There's enough aggression and lust online. You don't want to trigger those in yourself or your prospects or audience. Instead, trigger their sense to look within. Then nurture in them an inward desire to seek passion. It's not about you. It's NEVER about you. It's about THEM. This post is for you. Read it. Find your passion. Share it. Then help others to find theirs.

How to find your passion

Write the positive qualities of both - and it may even be the same person. What draws you towards them? What are you jealous or envious of about them? How are those things good? Now, look at your list. How many of those qualities do you feel deficient in? How many of those qualities would you like? Do you need that person to help you find those things within yourself? The obvious 'Yellow Brick Road' answer is that they're in you all along, but we are social animals with mirror neurons, so there's no reason at all to prevent you seeking their collaboration in the process. I do. When I've been envious of people in the past, I've hired them.

When you've finished with that exercise, you should have some decent notes on who you're drawn towards and who you're envious of. Strictly speaking, pay attention to what you're envious of rather than jealous of. Envy is a perceived lack within the self of something someone else possesses in their self. Jealousy includes the aspect of fear of loss. So, if you're jealous too, think what it is that you're scared to lose if this person keeps being awesome. Then ask yourself if what you stand to gain by being inspired is worth the price of surrendering the fear of what you stand to lose by them shining brighter than you perceive yourself to shine.

Why you don't have to be THE expert yet

Chronical the journey. You don't have to have it perfect yet. You can start out on your flawsome journey feeling like crap about yourself. Most likely nobody will realise that's the case. One of my clients, Chiara Francica, for instance just went public about her own envies, insecurities, and lack of self-confidence in the past. I'm so proud of her because she has always put on a front of having total confidence and it's only because I'm an empath that I saw through it. I doubt many others did. She's an absolute legend and total powerhouse of a woman with extraordinary success.

I am fortunate to have coached and made friends with many celebrities in the last 20-ish years, and they go through this stuff too. It's human nature. We're flawed and we know it. We all have days when we think we suck. It's not just you. You think between Tony Robbins saying he wasn't sorry about his comments on the 'MeToo' movement and the time he posted that he still had a lot to learn that he didn't have a dark night of the soul? Of course he did. Of course he had a moment when he faced his ego and said 'I suck'. But that's where the growth happens. And we can help others grow before we're 'perfect' ourselves. We'll never be perfect. We'll always be flawsome. So we should start today. We can dive into the shadows and switch on a torch. We don't have to have the whole room lit up before we lead others into it. You don't need a light switch. You just need a torch.

A Word Of Warning

Don't let your passions possess you. Don't let passions become addictions. The prevalent narrative right now is about being OBSESSED with work. Don't do that. Not work or creative pursuits. If you do, you cross from passion to lust. From choice to compulsion. From joyous fulfilment of your destiny to soul-sucking time-sucking Sucksville where you lose everything you love in pursuit of lust. That never leads anywhere good. I have watched entrepreneurs set up companies with extraordinary success, only to see them fall into a pit of insanity when their addiction to the highs of the crowds from the stage triggered selfish actions and short-term philosophies.

There are horror stories of people getting so high on their own supply that people have died following them into sweat lodges or 'drinking the Kool-Aid'. Please be aware that when you use that expression, you're referring to the deaths of people in a cult. You DON'T want to drink the Kool-Aid. Don't drink it. Stay awake. Stay more and more awake. Look into your soul and find what drives you. All of it. Find out who you're living for besides yourself. Find your why. Find your purpose. Live that purpose passionately, never addictively.

P.S. If you're still not sure what your passions are, pick up Gravitational Planning System (details below this post). It goes into way more detail than I can here about how to create your own universe, and draw people into it in a way that's ethical and driven by your true passions. If you hire me as a coach for 90 days, I'll give you that as a bonus.