What Being in a Coma Taught Me About Wholeminded Thinking 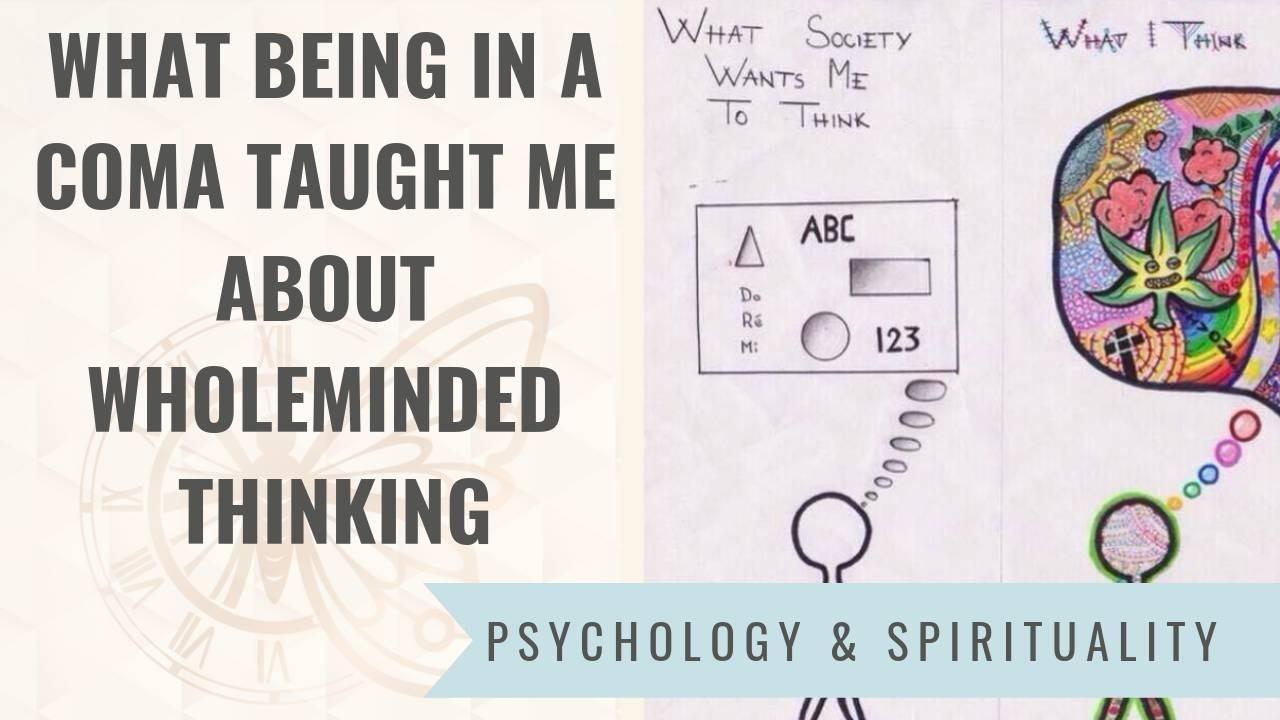 I'm a little weirdo. That's not an insult. I embrace my weirdness. Do you? I'm a freak. I'm a geek. I'm unique. Are you?

If you haven't heard 'Little Boxes', take a listen below. Then think for a second. What little boxes are you putting yourself into, and what are you typing into the little boxes online so that you look 'just the same' as everyone else?

When the Internet first appeared (and yes, I still use a capital 'I' because I was a Dot Com Pioneer and that's what we did. Deal with it. While we're at it, why do spelling correctors change twitter to Twitter, when it's always had a small 't'? Anyhow... I digress) one of the things we loved about it was the idea that we could now make our own rules.

If you can ever find a Dot Com Pioneer (we're few and far between. Most of us buggered off after the Dot Com Crash, never to return. Some of us still walk among you. Like the dinosaurs of old that hang out on bags of peanuts in your garden) you will discover that the early days of the web were marked by a different energy than we feel today. The early web (and I'm trying not to use brackets all the time, but it's hard when there are so many questions to ask. Why do mainstreamers and laggards insist on saying 'The Internet' all the time, when 'web' and 'net' are SO much faster?) was marked by the following feelings:

Millennials get so much press regarding the digital world, but it was Gen X that brought you the social web. We just did it on dial-up modems. The younger Boomers pioneered the infrastructure (All hail Tim Berners-Lee. We're not worthy!) and Gen X pioneered the culture. Millennials were the Early Adopters. Gen Z is mainstreaming the social web, as a whole new species of human. They need our help. Their brains are VERY different and they are truly an evolutionary leap. The working title for this new species is *thinks*... Artificialis Hominum. . Don't know whether or not that's good Latin, but it's what's happening. I made a free mini course on this here. Open it up for consumption after you've finished this post.

The point is, that we had big dreams for you all. We anticipated that the web would be led by youth. Partly, that's because we were in our 20s at the time, but partly it was because we were so freaking pissed off with the status quo. We were rebels, and we wanted to shake up the old order.

We were the ones who brought in Dress Down Fridays, leet speak, emoticons, memes, flexecutives, and conversational business chatter in place of buttoned-up stick-in-the-arse do-as-I-say rhetoric.

We brought in the idea of being human in business rather than stuck up and unapproachable. It was HARD to do that. You take this stuff for granted now. The Early Adopters of this mindset (Zuck et al) were able to use faster connections to bring it to the masses, but they weren't there for the birth of it.

They didn't create the culture. They didn't prepare the earth – or the Earth – for it. They just planted fast-growing GM seeds into the land we'd lovingly prepared, and those plants grew like weeds. As they did, they starved of light the early crops of hope and creative expression. In their place was an Ivy League Fraternity system, designed to pick out friends for you based on your existing little boxes. And the people embraced it. They are out there on Facebook right now, shaming people for reaching out to them without having X number of mutual friends. People actually brag about being programmed into life in a walled garden echo chamber.

On Facebook-owned Instagram, people obsessively filter themselves into compliance with a particular body image or hashtag. They make box-shaped little selfie boxes, and they all look just the same.

This is not the reason we created the social web.

This was not the dream.

I haven't mentioned the coma yet. I'm getting there. It's important that you get context first, and start thinking about yourself rather than me. Are you REALLY thinking for yourself when you post online, or are you doing what Zuck tells you to do? Are you just posting the same old crap in little boxes and being just the same as everyone else?

It isn't possible for me to think the same as everyone else. My brain is different than yours.

When I was 11, I was in a car crash. Short version: my brother was driving. He later died in another car crash. Anyhow... The car we were in went sideways. I went through the side window and then my head went through a wall. I mean... the rest of my body followed, but my head was the battering ram. I stopped breathing and began dying.

A few days later, I was out of the coma. Unable to speak, read, or write, I wasn't even given a speech therapist as recovery was impossible. My IQ was 7 years behind my peers. My parents were told I'd be a 'vegetable'.

Guess I'm a super-freaking smart vegetable then. I taught myself to speak, read, and write. Got a degree in English. Pioneered Internet Marketing. Became a bestselling author. Became a magazine columnist. IQ in top 2%. BOOYAH!

Going through this experience taught me some things:

Your Duty On Social Media

As you go out into the confirmation bias bonanza that is social media today, ask what you're bringing to the conversation that is new. What is fresh? What is completely YOU?

Here's the thing. You must have proverbials of titanium to get out there in a truly real way. It takes guts to say that you have one part of your life down, but another part is a complete hot mess. But I do that. We must do that.

We have a duty to our audiences to give them our best stuff. Sometimes, our best stuff is our worst stuff. It's the things that society doesn't want us to say. Society doesn't want me to tell you that narcissists can be great people. It doesn't fit the existing social media 'all narcissists are monsters' narrative. But... I pointed out that if all narcissists are monsters, it's a bit strange that all superheroes are narcissists. I got a LOT of flack for that. Some people thought I could only make that claim because I had never met a 'real' narcissist. I was dating one. He chucked me in the middle of my book launch. Lol. Then, I got flack because how could I make that claim, knowing the pain narcissists can cause? I can make it because it's true. It's messy and it's triggering. It hurts like hell, because I want to hate all narcissists. But I can't. Because, just like anyone else on the planet, the people with these traits are awesome. They are varied. They are unique. They are human. I can't bring myself to hate humans. I just can't.

I can't bring myself to comply with The Zuck's rules about who I 'should' befriend.

I can't bring myself to keep quiet about the fact that I struggle with things, and I overcome those struggles.

I can't bring myself to avoid seeing the greatness, and goodness, and divinity within YOU, whomever you are. Whatever your particular glitch. Whatever your particular wounds. I see you. It is not only my pleasure, but also my purpose to help you shine. You don't need to become a whole new kind of person to shine. You just need to understand fully your freaky, geeky, unique self. Then polish the best of it, and share the rest of it. Share your diamonds. Share your coal too. They're just different stages of the same thing. Your value lies in the messy mines of your wounded heart. Your test is your testimony. Your mess is your message. Stop living in a neat little box. Start living your messy truth.

P.S. If you're struggling with any of this, let's chat. Free. No obligation. Here's how I help people.

P.P.S. If you prefer to go through courses to learn things, check out my shop. Oodles of goodies for mindset, business, and creativity. There are some free courses there too. The Clockerfly Store of Metamorphosis